AKRON, Ohio — When I enter the Himalayan Music Academy in the city’s North Hill neighborhood, I am greeted by a hallway filled with children’s shoes and backpacks. Echoes of laughter mixed with faint piano harmonies grow stronger as I head down the hall to a small room. The room is bouncing with educational vibrancy. Nearly 20 children are seated on decorative rugs in the center of the room, listening to a man who is teaching them Nepali consonants. They listen attentively, raising their hands with passionate fervor when asked questions. 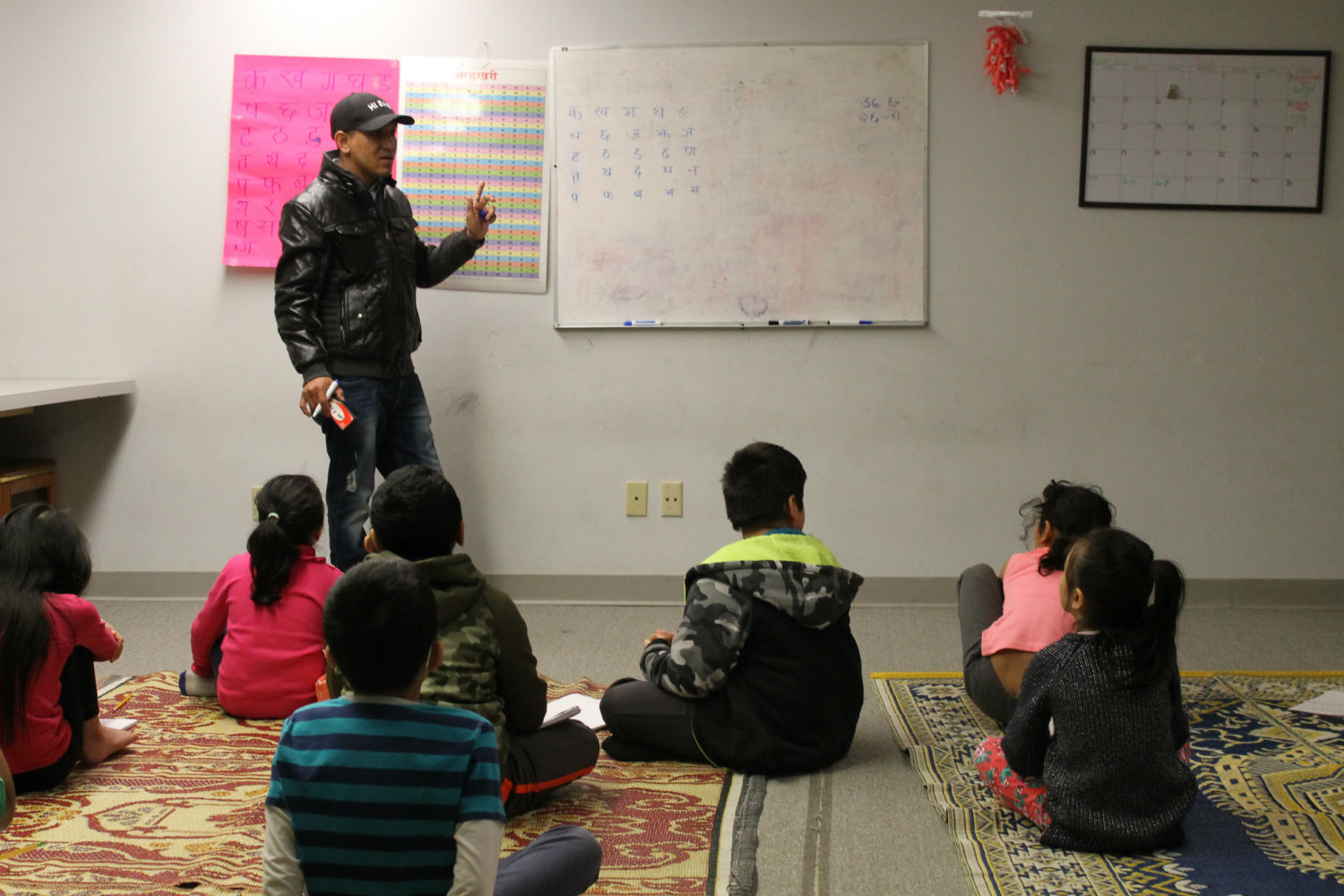 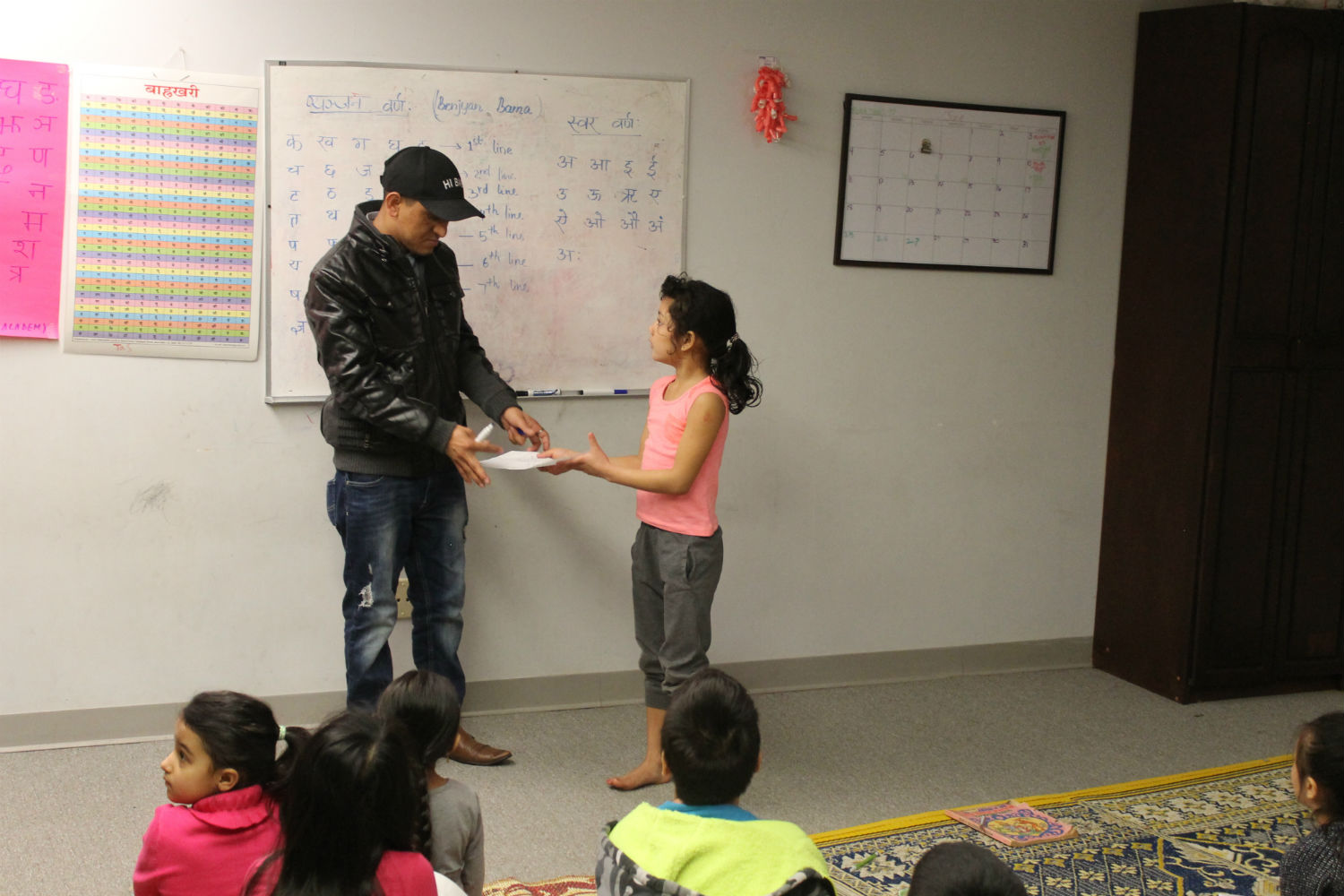 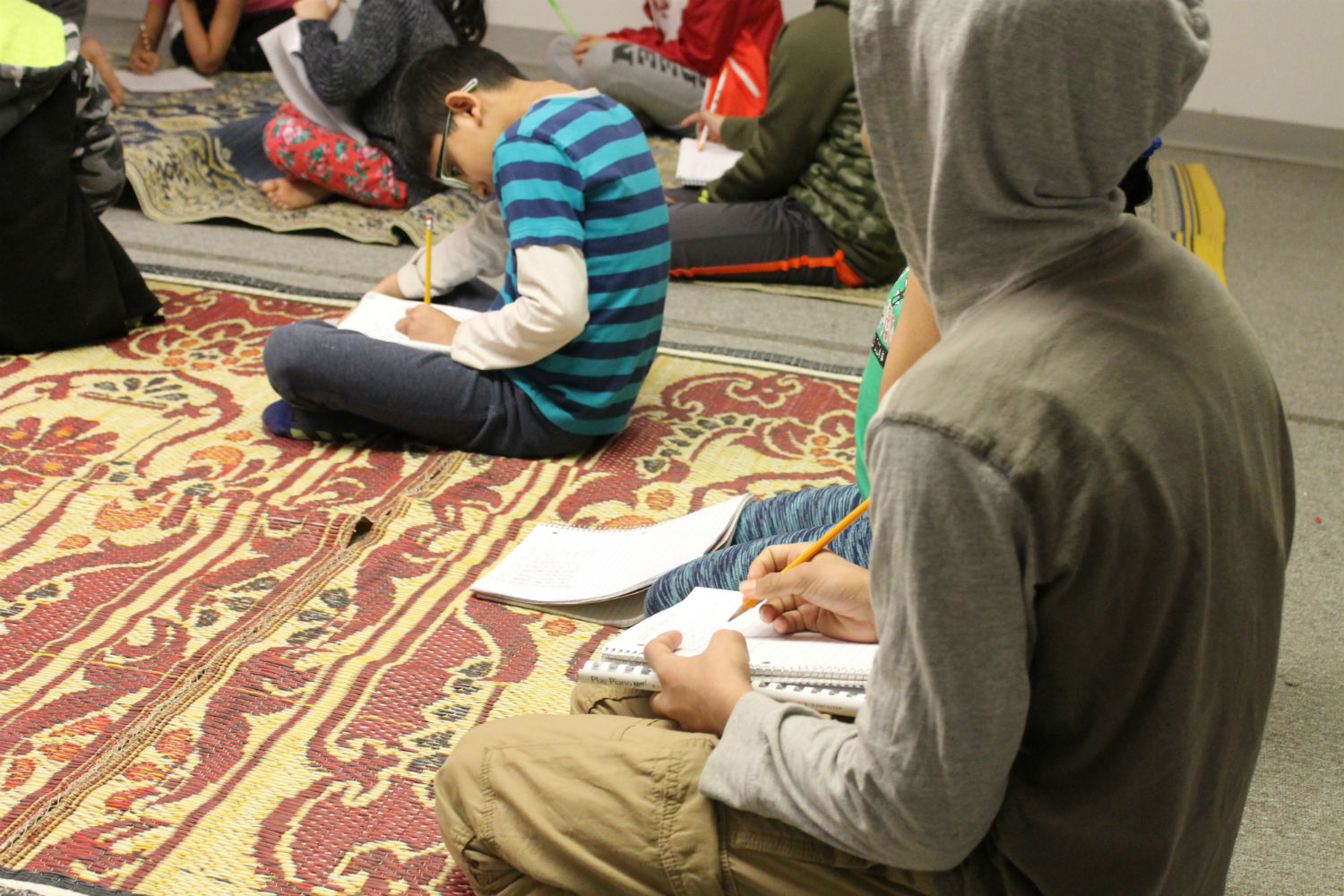 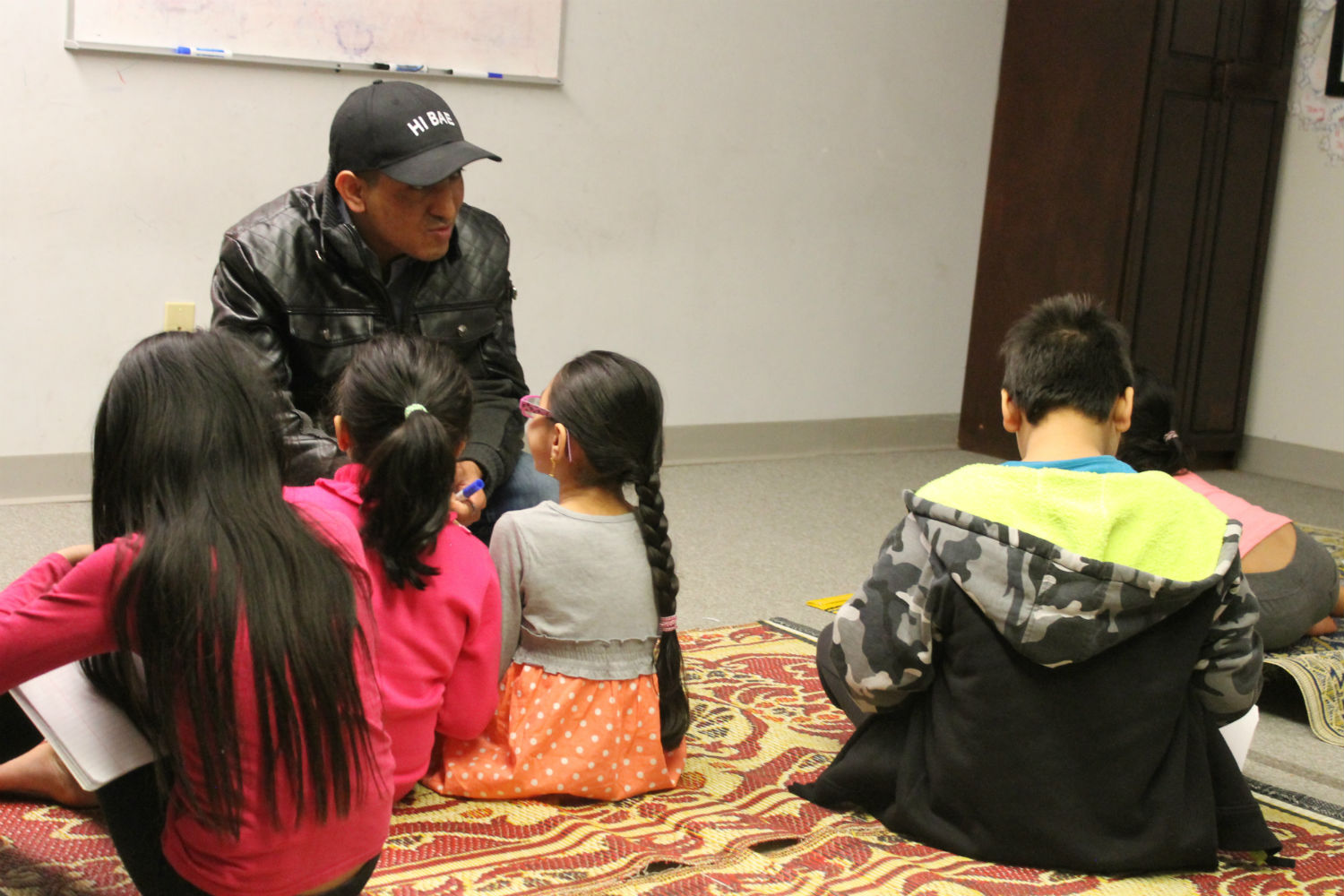 Other children are running in and out of a smaller room toward the back of the academy, where a music class is taking place. Rhythmic melodies circulate in the space between the music room’s door and a large white pillar, where I stand watching the joyful chaos. I later learn that the sounds I was hearing were courtesy of traditional Nepali instruments, including the bamboo flute, sarangi, tabla, and madal, among others.

I stand there for a while, taking in the essence of the academy. Once he is able to break free of his students’ hugs, I begin to chat with Gopal Ghatani. Gopal, 33, is one of the Nepali language teachers at the academy, though not the one teaching this day. During the week, Gopal works in adult day care, helping Nepali speaking Bhutanese refugees with disabilities navigate their daily routines.

He tells me that he spends his weekends volunteering as a Nepali language teacher because he feels a strong pull to support his community. This commitment runs deep: “I do this because this community is my permanent family. You give your family what you have, and I am happy to be here with my family,” he said.

This talk of family is both literal and metaphorical, seeing as his brother-in-law owns the academy.

Gopal is originally from the Dagana district in Bhutan, where he lived until he was seven. His family was forced to flee to neighboring Nepal, leaving all of their belongings behind. In Nepal, they lived in a refugee camp in the Morang district for almost 21 years (from 1992 to 2013).

In 2013, Gopal made the journey to the United States, landing first in Riverdale, Md., but soon discovering that a more fulfilling life was waiting for him in Akron.

“My relatives were living in Akron, and so I needed to come here. I need to be with my people,” he said.

When I ask him about his experience teaching the Nepali language, his eyes light up. He tells me about the children, pointing to individuals and telling me their names. The students are ages 2-11. Some were born in the camps in Nepal (coming from both the Jhapa and Morang districts) and others were born here.

He explains that the students are learning the basics of Nepali. “Some of the children learned Nepali in the camps, and others are too young to remember,” he said. “Their families sometimes encourage them to speak in English, so they assimilate, but it’s important to learn Nepali.”

He starts telling me about the language, explaining that each consonant can make 12 different sounds. I look at him in amazement and ask if the students struggle.

“They may struggle at times, but it is easy for them. It is in their blood,” he said.

Gopal explains that the purpose of the Himalayan Music Academy is to give the students a chance to grow intellectually, emotionally, socially, and spiritually. Language — like music — is at the heart of any community’s cultural heritage. If it’s in their blood, it is a part of them, and Gopal believes learning it can help clarify identity questions these students often come across.

Our interview is interrupted by a change of pace. The language class has ended, and dance class has begun. The children form two lines facing a young woman, around 19 years old, who begins teaching them traditional Nepali dance moves. 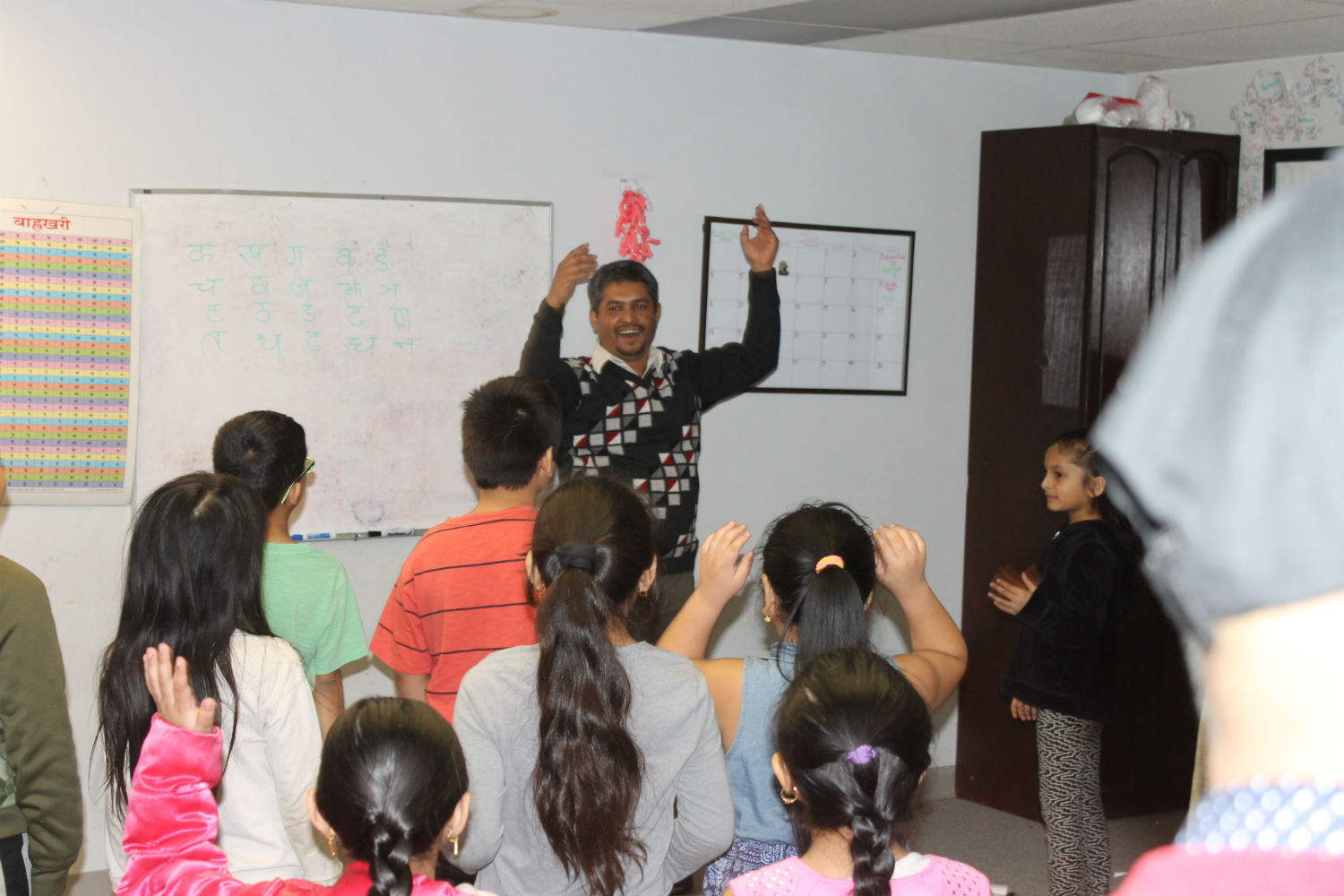 I weave around the room, snapping photos and waving at the students. I sneak into the music room to see what’s going on there. I find a six-year-old girl named Lungma, who tells me her name means “heart.”

I ask her what she likes about learning Nepali. She tells me that her sister Sawan, 10, would be able to tell me more, but that she personally likes learning about food. She says, “Nepali is hard to write, but it’s easy to speak.”

Lungma takes me to her sister, who is taking a break from dancing in the other room. Sawan tells me that learning Nepali is important so that she will not lose her culture. I ask her if she will one day teach her children how to speak Nepali, and she bluntly states, “It will be torture for them, but yeah.” We laugh together, and it is clear that the value of maintaining Nepali language is shared widely by the community.

After dance class ends, groups of children rush over to me and ask me questions about myself. I ask them to teach me some Nepali words. They teach me “ama” (mom), “baba” (dad), “didi” (sister), “bhai” (brother), and “mama” (uncle). The theme of family becomes apparent once more.

A young boy named Shushant, around seven years old, teaches me how to say “mouse” (musa). He rattles off about 15 other vocabulary words, speaking faster than I can write. He then goes on to tell me that he’s learning Nepali because “you shouldn’t forget your own language.”

The mother tongue holds a power over its people, and Gopal and his students recognize this. The Akron community has begun to embrace the Nepali language, with signs throughout North Hill written in both English and Nepali.

The Himalayan Music Academy welcomes donations to support musical performances, classes, and transportation costs. You can learn more about the academy and donate by visiting its website: https://www.merohma.com/ 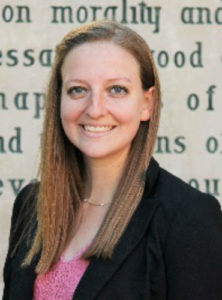 Katie NormanJounalist
Katie Norman is a Master’s candidate in the International Studies program at Ohio University. She works part-time as a Graduate Assistant at Rural Action, a community development organization based in Southeast Ohio. In the past, Katie has interned at Catholic Social Services of the Miami Valley, helping to resettle refugees in the greater Dayton area. After graduation, she hopes to find work that will allow her to continue the fulfilling and exciting journey of intercultural exchange. Contact her at normank4therine@gmail.com.